The July 20, 1944 coup attempt was centred in the Bendlerblock, the headquarters of the Allgemeines Heeresamt (General Army Office) and Ersatzheer (Reserve or Home Army). The site was commonly referred to by the adjoining street name, the Bendlerstrasse. The site is a large complex of buildings that is located directly south of the Tiergarten, on the Landwehr Canal. The complex was also the headquarters of the Oberkommando der Wehrmacht (OKW) or combined armed forces high command before its relocation to Zossen, south of Berlin. Admiral Wilhelm Canaris' Abwehr counter-intelligence organisation was also located in this complex until relocated to Zossen in 1943.


The site saw several significant historical events through its years of occupancy by the army and naval arms of the military services. The expansion of the German navy was planned here in the reign of Kaiser Wilhelm II and it was the site of Hitler's speech of February 3, 1933, on Lebensraum (living space) in the east. The site is now best known or being the setting for the coup d'etat phase of the July 20, 1944 bomb plot.

The Bendlerblock was severely damaged in the Battle of Berlin in 1945, when it served as Helmuth Weidling's headquarters for all German forces fighting the advance of the Russians.

The site is currently occupied by various government ministries with the exception of that portion of the site were the coup was run in 1944. This is now the site of the German Resistance Memorial, a museum dedicated to all forms of resistance to the Nazis.

The memorial courtyard is a public site dedicated to the memory of the officers who died there in the early hours of July 21, 1944. It also provides a more general memorial site to those who took part in the bomb plot. When I visited the site late on a Sunday afternoon in 2006, I found it to be a very haunting place. I had the place completely to myself and found that the impact of the courtyard was magnified by the effect of surrounding office buildings suppressing the ambient street noise usually heard in such a large city like Berlin. Its a place of quiet reflection most days and on the anniversary of the bomb plot, it is a focal point for a large memorial service that involves government and foreign dignitaries, senior soldiers, and descendants of officers and others individuals who took part in the resistance.

The entrance into the courtyard is found on the east side of the complex. One enters the site through a large sized opening with a very strong barred swinging gate. In July 1944, the courtyard looked very different, with construction materials, sandbags and a large pile of sand being stored in the location. It was here that Valkyrie conspirators Claus von Stauffenberg, Werner von Haeften, Friedrich Olbricht and Albrecht Ritter Mertz von Quirnheim were shot. The firing squad was ordered under the personal authority by Generaloberst Friedrich Fromm, commander of the Reserve Army. The execution was carried out by soldiers from the Berlin Guard Battalion.

The memorial courtyard was designed by Professor Erich Reusch and the following inscription was engraved in the wall of the entrance in 1980:

"Here in the former Army High Command, Germans organized the attempt to overthrow the lawless National Socialist regime on July 20, 1944. For this they sacrificed their lives."


The memorial courtyard was re-designed by Professor Erich Reusch and the following inscription was engraved in the wall of the entrance in 1980:

"Here in the former Army High Command, Germans organized the attempt to overthrow the lawless National Socialist regime on July 20, 1944. For this they sacrificed their lives."
On July 20, 1953, Berlin Mayor Ernst Reuter unveiled a striking monument created by Professor Richard Scheibe; a figure of a bound man in bronze. Some believe that this is intended to be a portrait of Stauffenberg and admittedly it does look somewhat like him. I believe the sculpture is intended to portray a generic political prisoner.

Set into the cobbles, in front of the bound figure is a bronze plaque with the following words written by Professor Edwin Redslob:

"You did not bear the shame.
You fought back.
You gave the great,
Forever tireless
Sign of change,
Sacrificing your glowing life
For freedom,
Justice, and honor."

These are the words quoted at the conclusion of the recent film "Valkyrie."

On the western wall of the courtyard is another small bronze plaque set in the wall. It would be easy to miss given the immediate visual impact of the bound man sculpture. The fact that the wall plaque is almost always adorned with a large wreath ensures that even the casual visitor will see it. And that is a good thing as this is the most specific memorial to the men of July 20.

On July 20, 1960, Mayor Franz Amrehn unveiled this memorial plaque in the commemorative courtyard bearing the names of the five officers who were executed in the Bendler Block on July 20, 1944. 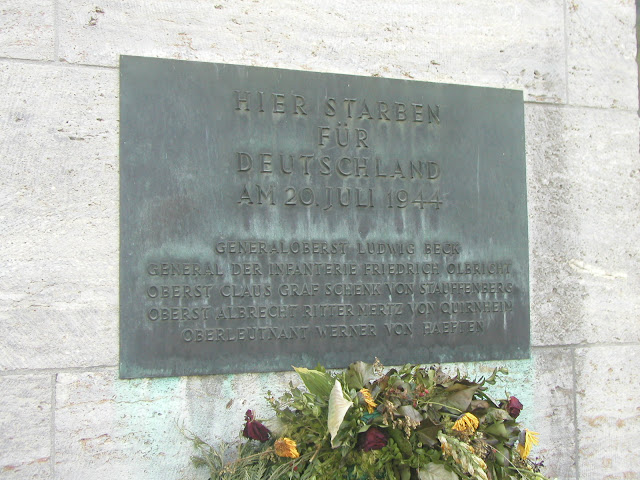 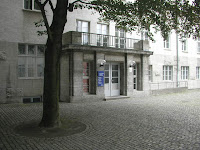 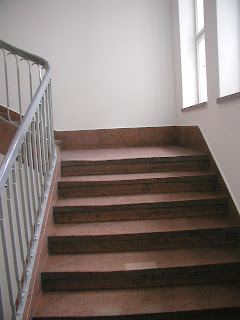 One enters the Home Army's portion of the sprawling Bendlerblock complex from the memorial courtyard. Upon entry, one is greeted by the same red stone staircase that was used by the condemned officers shot in the wee hours of July 21. One can imagine Werner von Haeften breaking away from the soldiers of the firing squad who were bringing him and his three comrades down from their offices to the dark courtyard lit only by the headlights of a few army trucks. Von Haeften tried to flee from his escort as his survival instinct took him over. One can admire how quickly he settled himself down, as witnesses noted that when the firing squd commenced its duty, he threw himself in front of Stauffenberg and took the bullet meant for his mentor. 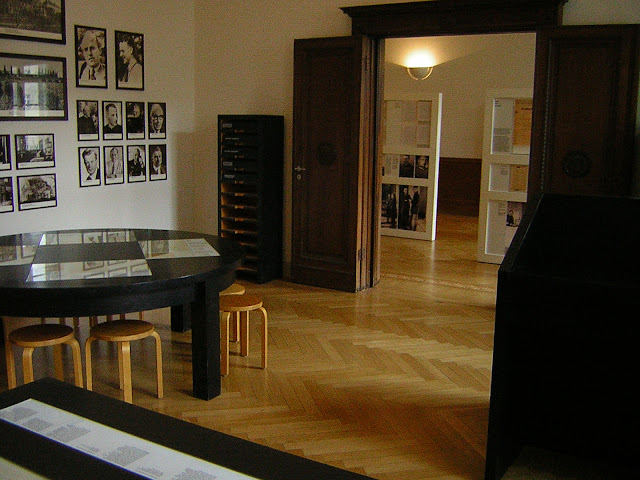 As shown above, the former offices of the Ersatzheer have been beautifully refinished and made into a very effective musuem to the German Resistance in all of its forms. While located in the actual offices of the officers who tried to kill Hitler and take over the Nazi government in 1944, the displays include resistance by the churches, the communists, the Jews, as well as non-military groups like the White Rose and the Kreisau Circle. But as one might expect, the July 20 plot takes centre stage and the displays show key documents and photos of the main actors in this tense drama.

As one proceeds through the exhibit, one is faced with several stark reminders of the events that took place here. The display on Claus von Stauffenberg is located in his former office, where a very striking bust of the colonel sits on the mantle. Stauffenberg's life and career are traced via well-known photos. 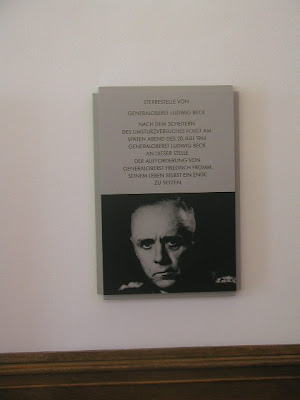 In another room, there is a small plaque on the wall. The plaque commemorates Generaloberst Ludwig Beck, one of the key leaders of the July plot, s well as earlier conspiracies dating back to 1938. Beck resigned s Chief of the General Staff in 1938, after trying to get other senior officers to resign en masse in protest against Hitler's bellicose policies. Beck firmly believed that Hitler would lead Germany into a world war and, worse still, that he would do it before  the military was ready to fight it successully.  When all was clearly lost for the conspiracy on the night of July 20, Beck successfully appealed to hiold comrade Generaloberst Fromm for permission to take his own life rather than face retribution and potentially torture from the regime. Beck borrowed a side  arm form a Guard Battalion officer and made two unsuccessful attempts to shoot himself in the head. He only succeeded in wounding himself. Fromm ordered an officer from the Guard Battalion to finish the job. That individual allocated the unpleasant duty to one of his NCOs, who ended the life of the respected former Chief of the General Staff with the coup de grace.

The Gedenkstaette Deutscher Widerstand (GDW) is currently undergoing renovations and is closed from July 2014 to 2015. If you are in Berlin after it reopens and if you have an interest in this very tragic and important event, which could and should have decisively changed the course of European and world history, the GDW is well worth setting aside some time to visit.

The museum also has its own excellent web site with material in both German and English. The site describes the history of the Bendlerblock and provides short biographies of many of those who were invlved in resistance against the Nazis from 1933 to 1945. The main players in the military plots are covered, but so are the small time individual resisters who took stands based on their own consciences with little hope of making a difference or even of being remembered by history.

Note: Photos on this page were taken by myself or my son on our visit in 2006,